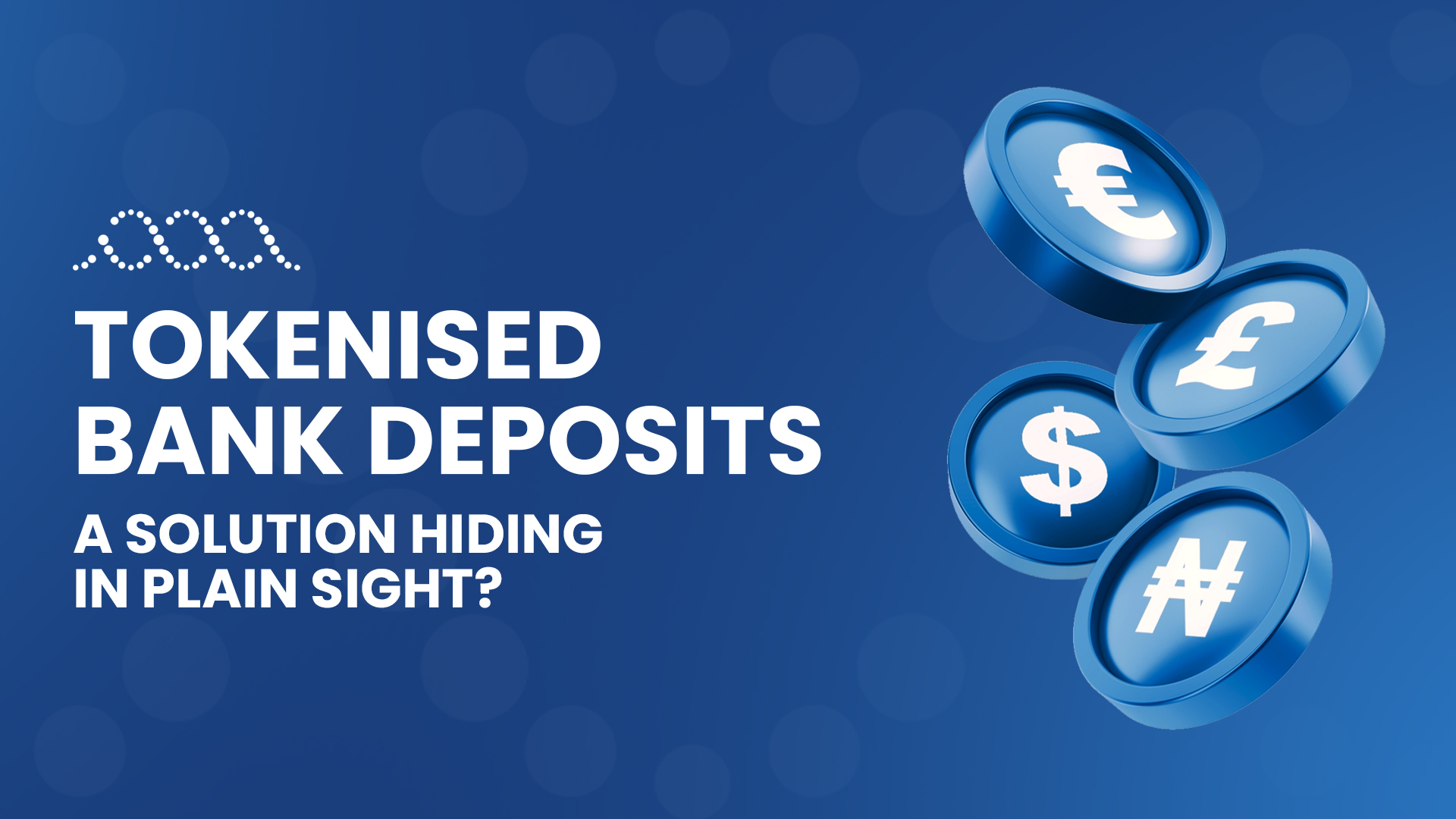 Have you ever stopped to think about happens to your money once you put it in your bank account? Most people simply deposit their earnings and assume that it just sits there, available for them to use whenever they need it. However, the reality is slightly more complex.

At the core of our financial system is a two-tiered structure, consisting of publicly-issued central bank money and privately issued money created by commercial banks.

Central banks, such as the Federal Reserve in the United States and the Bank of England in the UK, are quasi-governmental bodies responsible for implementing a country’s monetary policy.

Commercial banks, on the other hand, are highly-regulated, privately-owned institutions responsible for taking deposits from individuals and businesses, and using those deposits to provide loans to others in the form of home mortgages, small business loans, and other forms of credit.

Bank Deposits Are — By Far — The World’s Most Popular Form Of MoneyWhen asked to picture money, most of us imagine notes and coins, like Scrooge McDuck’s money bin.  However, the vast majority of today’s money is already electronic, with physical money, a.k.a. cash, only making up 3% of all money.

As cash is the only form of central bank money available to the general public, privately issued commercial bank money represents by far the most significant portion of the money in use — comprising a whopping 97% of all money in general circulation.

This fact underlines the how crucial of the smooth operation of the commercial banking system is  the stability of the economy as a whole.

Unfortunately, the technological infrastructure currently supporting our financial system is still heavily reliant on outdated systems and processes that are hindering progress and costing businesses and consumers time and money.

One of the most shocking examples of this is the fact that $3 trillion per day of global commerce is still passing through decades old mainframe computers running COBOL — a programming language was invented in the 1950s — not well suited to the needs of modern commerce.

Although tapping your card or phone seems like a convenient way to pay, behind the scenes it can take 5 or more intermediaries to make that payment happen — each taking a fee and adding a delay, meaning merchants pay up to 4% of every sale to process payments.

In the US, these card processing fees cost merchants an incredible $137.8bn per year — much of which is passed on to consumers in the form of inflated prices.  According to the National Retail Federation, this means that “no fee” cards cost each consumer an average of $700 a year.

Plus, what seems like an instant transaction at the point of sale often takes days to settle in the background, meaning that it can take up to a week for the money from a given transaction to actually reach their bank account.

Despite living in a 24/7/365 connected world, many of today’s financial infrastructure systems still have limited ‘operating hours’ which contribute to these settlement delays and potentially negative effects on merchant cash flows.

The Rise of Digital Currencies

In recent years, both privately issued stablecoins and Central Bank Digital Currencies — digital representations of national currencies, often built on blockchains — have begun to gain interest due to their numerous advantages over the world’s current financial plumbing.

One of these advantages is increased efficiency. With digital payments, transactions can be completed almost instantly, as opposed to taking several days. This means that businesses can receive payment for goods and services more quickly, which can help to improve cash flows and reduce the need for working capital.

This also means that digital payments are often cheaper for both individuals and businesses, as they eliminate the need for many intermediaries in the payments chain, which  can result in lower fees for consumers and merchants, making it more affordable to send and receive payments both domestically and internationally.

A third advantage of digital money is greater financial inclusion. Many people, particularly in developing countries, do not have access to traditional financial services such as bank accounts and credit cards, in part because servicing low-income users can be loss-making for financial institutions, unless they charge premiums high enough to become prohibitive for many would-be customers.

Financial inclusion means affordable, effective, and safe financial services for everyone.  Digital money can provide a way for these individuals to access financial services, enabling them to send and receive payments, save money, and borrow money. This can help to reduce poverty and improve economic development.  For example, the growth of digital e-money services in Kenya has helped to lift around 1 million people out of extreme poverty.

Not All That Glitters…

However, in addition to the many advantages, there are also several drawbacks to digital currencies that must be considered.

The lack of consumer protections across much of the sector is also a problem. Because many stablecoins are not issued by a regulated entity, there is no guarantee that consumers will be able to recoup their funds in the event of a hack or other security breach — even the reserves of many purported ‘fully-cash-backed’ stablecoins have repeatedly been areas of concern.

This lack of safeguards can create uncertainty for consumers and make them hesitant to use stablecoins, or worse, left holding heavy losses on something they believed to be risk-free.

There are also limits to utility, as stablecoins lack fungibility between different tokens. For example, USDC, USDT, and DAI are all stablecoins pegged to the US dollar, but they are not interchangeable. This lack of fungibility can create confusion and inconvenience for consumers, especially when compared to traditional fiat currencies, which are accepted and treated as the same regardless of the bank they are issued by.

With regard to CBDCs, there exists a portion of the public who have expressed concerns with a potential erosion of privacy or other overreach. Because CBDCs are issued and controlled by central banks, some worry that CBDCs could be used by governments to track, monitor, or even restrict, the financial transactions of citizens.

Ultimately, however, the most tangible risk posed by stablecoins and CBDCs could well be the risk of disintermediating the role of commercial banks, thereby disrupting the credit creation process and potentially undermining the stability of our economy as a whole.

There is, however, a relatively straightforward solution to the issues listed above. As noted by the New York Federal Reserve, we already have “a well-functioning banking and payment system. Why not take advantage of that, and issue tokenized deposits?”

The NY Fed’s post, titled The Future of Payments Is Not Stablecoins, argues that we argue that if blockchains — with their exponential advantages over current payment rails — are the transfer mechanism of the future, then it is only common sense to issue the most popular form of money on that transfer mechanism.

Tokenising commercial bank money on a modern distributed ledger network would allow for the real-time transfer of funds, reducing the need for outdated processes like correspondent banking, and eliminating many of the delays and fees that are currently associated with traditional payment methods.

Tokenised bank deposits would avoid unnecessarily locking up liquidity like fully-reserved backed tokens, supporting credit creation in the economy as assisting with the execution of  monetary policy.

Commercial bank money also has a number of other attractive features; being issued solely by regulated institutions they are (in many jurisdictions) protected by deposit insurance (up to $250,000 in the US and £85,000 in the UK), which provides outstanding consumer protection.

Perhaps most importantly, consumers would be able to use tokenised deposits to purchase goods and services through well-established and well-functioning networks, because they would be interchangeable with all other forms of recognised money in the economy — they would always be accepted at par.

The Bank for International Settlements refers to this fungibility trait as the “singleness of the currency” — formed in large part through the convertibility of commercial bank money into central bank money, something the regulatory and legal framework allows commercial banks to do with a higher degree of certainty than many other types of digital currencies.

This in turn creates a payment network that allows funds generated from multiple private sources to be exchanged seamlessly with significant economic benefits.

There are several reasons why tokenised deposits have yet to take off: the inherent difficulty redirecting the inertia of large institutions;  the ‘chicken-or-egg’ dilemma; and a lack of suitable infrastructure each play a large part in delaying the progression to natively-digital commercial bank money — although big changes could be just around the corner...

I'll explore some of the changes in my next post.

Introducing Millicent Network — Infrastructure for the Future of Global Finance